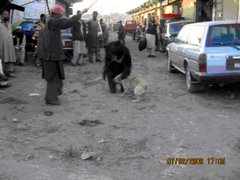 The World Society for the Protection of Animals (WSPA), the world’s largest federation of animal welfare societies, has detected bear baiting activity in Islamabad. Unlike the large-scale bear-baiting events organised illegally in rural Pakistan, this event involved only one bear at the Islamabad bus stand.

The young Asiatic black bear, tethered by a rope through its nose, was set upon by two ferocious dogs in the back streets of Islamabad. This cruel spectacle was witnessed by several onlookers who appeared to rejoice in the bear’s attempts to fight off the attacking dogs. All information has been passed on to relevant authorities for a full investigation. It is hoped the Kalandar owner will be apprehended and his bear confiscated.

Fakhar Abbas, WSPA’s Pakistan Representative, said, “It is disturbing that bear baiting occurs within Islamabad, as previously it was thought to have been localized to rural areas only. We urge the authorities in Islamabad to investigate this incident fully as firm and appropriate action must be taken against the Kalandars involved.”

In 2001, President Musharraf issued a Decree calling for the enforcement of the existing ban on bear baiting, reinforcing Pakistan’s Prevention of Cruelty Act (1890). President Musharraf also directed that confiscated bears be moved to a WSPA built sanctuary in Kund Park, North West Frontier Province, Pakistan, which was handed over to the authorities in 2002. Pakistan’s National Council for the Conservation of Wildlife (NCWW) has endorsed this decision in subsequent years and the sanctuary is now home to seven rescued bears.

Anyone with information on bear-baiting activity in Islamabad should contact WSPA representative at 03009552253.