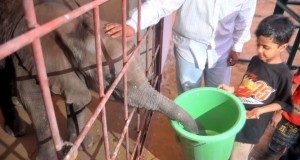 Four wild-caught infant elephants from Tanzania have arrived in Karachi, cialis despite much pressure from international organizations. PAWS has learnt that these infants were forcibly removed from their mothers, in one instance resulting in the death of the mother elephant as she tried to retrieve her baby. In Pakistan, the import of these elephants has also not been without controversy. Read more here.