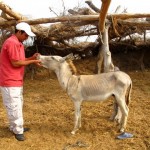 Earlier this year, a group of medical and veterinary doctors set out from Karachi for an overnight medical camp to Khorwah in district Badin, Sindh. The group included doctors, veterinarians and volunteers from the 4X4 Offroaders Club and the Pakistan Animal Welfare Society, who were selfless in their efforts to give back to a community. 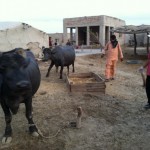 We arrived in Khorwah in the late afternoon, and while the medical team set up camp at the farmhouse, veterinary student Ali and local livestock assistant Ali Nawaz went to the nearby fields to see if any animals needed treatment. Their first patient was a buffalo with cunjunctivitis who was given eye drops. A few buffaloes and cows were quite dehydrated and malnourished. One had the flu and so was given an anti-inflammatory injection. We continued to see patients well into the sunset. Our last patient was a young buffalo calf that had collapsed after coming back from the watering hole. He was suffering from hypocalcemia, dehydration and a low temperature. We provided him with the necessary treatment and instructed the farmer to move the calf to a shady area, as the sun is blazing hot during the day.

Back at the campsite, the medical team was preparing for seeing patients who would arrive in the morning from nearby villages. Some of them were refugees from the flood affected areas and who had then stayed on in Khorwah. After a hearty dinner and a couple of campsite offroading stories, everybody finally called it a day. 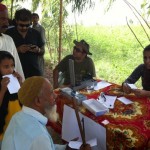 The next morning, people had already begun to line up to see the doctors, some of whom were still asleep! Livestock assistant Ali Nawaz came over and we collected our veterinary medicines and were on way to the village of Mor Palari where a couple of ill animals awaited us. Mor Palari has a total of 9 households and a 100 large animals. One of the men there had lost 12 animals over the course of a few days. He suspected an obstruction in the stomach, which is generally caused by digestive distress from a hard bolus. This could be due to their diets, which hardly comprise any greens, and little access to fresh drinking water.

One female buffalo had colic the night before. She was administered a carminative mixture to help ease her stomach. Ali suggested that the animals should also be vaccinated and anti-venom provided for snake bites. 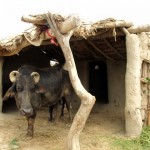 One common complaint by all the farmers was the lack of availability of genuine veterinary medicines. Most of them in the local area were fake and led to all kinds of complications. The government veterinarian visited their area once in about ten days, and the nearest veterinary store/dispensary was 25km away in Golarchi. Poor animal management was observed generally. Drench (deworming medicine), which should be given twice a year, was not used. A lack of fresh greens in the diet led to malnutrition and general weakness in the animals. Many of the animals were without shade and had fever. No water system or trough were seen throughout our visits.

Amongst chickens, disease spreads like wildfire at least once a year. Most of them don’t make it. The local livestock assistant told us that since buffaloes cannot sweat, they need to be around water to keep cool. Most of the farmers keep them under the sun and don’t take them to watering holes enough. Since none of them getting proper nutrition, their milk yield was low, they had shorter lifespans than average, and they also reached maturity later. 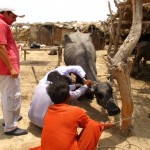 Later in the morning, Dr. Zulfiqar Haider Otho from the Karachi Animal Hospital joined us on the rounds. He had set off from Karachi with a team of doctors in the morning. His first patient was a buffalo with an abscess on the neck. He removed the abscess under local anesthesia and instructed the caretakers on how to look after the wound.

Dr. Mohsin Ali, a local vet in Khorwah also joined our team. He told us about a farmer who fed his buffaloes grass sprayed with some chemical and they all died. He was quite pleased to spend time with our team and took us to a number of sick animals in the area. The cases ranged from lameness, chronic mastitis, eye problems, malnutrition, diarrhea and emaciation.

View this document on Scribd 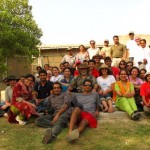 By late evening we had down the rounds of a couple of neighboring villages and had seen all the sick animals. We headed back to the farmhouse where the medical doctors were winding up camp. The remaining veterinary medicines were handed over to Ali Nawaz and Dr. Mohsin Ali. After a quick mandatory group picture, we piled into our cars and headed back to Karachi.

2 thoughts on “Veterinary Treatment of Livestock at Khorwah, Sindh”