decease Sindh after the floods of 2010″ src=”http://pawspakistan.org/wp-content/uploads/2012/01/IMG_7108-150×150.jpg” alt=”” width=”150″ height=”150″ />In July and August of 2010, unhealthy floods wiped out 1.2 million large and small animals in Pakistan and left those that survived in poor condition with limited access to food. For Eid-ul-Azha that year, Pakistan Animal Welfare Society (PAWS) initiated a campaign to help restore the lives and livelihood of people affected by the floods. We encouraged people to buy a female goat and send it back to a village to replace what was lost and help people back onto their feet.

PAWS partnered with Thardeep Rural Development Programme (TRDP) to identify 68 beneficiaries in 22 villages of District Jamshoro in Sindh. These beneficiaries were widowed women who were heads of their households. The gift of a goat provided them with ongoing income for their families through the sale of milk, ghee, meat and kids, as well as supplemented their own diet and agriculture. 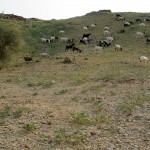 Funding for the project was made possible through generous donations by individuals to PAWS. The goats were procured by TRDP through a purchasing committee which sought quotations, evaluated them and purchased from the lowest bidder. A veterinary doctor verified the health of the goats, after which TRDP delivered the goats to the recipients along with fodder for two months.

In return the women agreed to report about the health of their goats in their monthly village meetings, and promised to get their children enrolled in school from the additional income generated. They also agreed to not sell their goats for at least a year.

A detailed report from TRDP is online here:

Link to the campaign is up here. 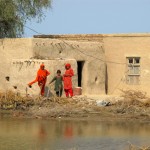 As a result of the success of this campaign, and in light of the additional flooding of 2011 caused by torrential rains, PAWS has decided to make this a year-long collection. You may make a goat donation here.