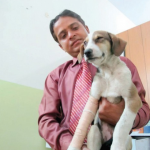 Mahera Omar and Maheen Zia want to establish a state-of-the-art emergency medical centre for animals. The puppy pictured was hit by a car in DHA, prescription as a result of which its leg was injured. A PAWS volunteer picked the puppy up and brought it to the Karachi Animal Hospital, order where it was treated by Dr Otho, who is holding the puppy in the picture.

The complete article is online here. We encourage you to post comments on their website for highlighting the plight of animals and the urgent need for such services in the city. Thanks!

KARACHI: If your cat swallows a ball of fur or your dog eats chocolate, don’t panic. All you have to do is call the Pakistan Animal Welfare Society (PAWS) and they will help your distressed pet.

The society, which was founded in 2004 by Mahera Omar and Maheen Zia, is currently trying to establish a shelter and medical facility exclusively for animal emergencies. It will be equipped with X-ray and ultrasound machines as well as operation theatres. The facility will also have a 24-hour ambulance service. Treatment will be provided not only to cats and dogs, but other animals such as donkeys, horses and mules as well.

But Omar acknowledges that this will be a challenging task, given that the society has limited resources at its disposal. PAWS does not have an office, shelter or clinic of its own and relies entirely on volunteers to help pick up injured animals from the streets and coordinate with private veterinary clinics for treatment. The founders hope to launch the 24-hour ambulance service first, which they feel is achievable with a little help from animal lovers.

Most of the rescued animals are currently given shelter at Karachi Animal Hospital, which is a private clinic in DHA, or PetVet Emergency Veterinary Clinic. But since the facilities have limited space, the co-founders sometimes have to take abandoned cats to their houses.

PAWS also provides advice on animal care and helps find foster homes for animals. Dr Ayaz Ali, one of the vets who treat animals for PAWS, said that the organisation gets between four to 12 calls per week for rescuing stray animals.

“If the animal is badly injured, I take it to a shelter in a taxi or a rickshaw,” he said. “If there is no shelter available, I take it to my house.”
Omar lamented the lack of infrastructure for animal welfare in Karachi.

Though the government has established the Richmond Crawford Hospital, the quality of its services has been waning. She said that most people usually don’t care about ailing animals. “They need to realise that if we help a donkey or a goat, then we might be indirectly helping those people who need them to earn a living,” she said.

Omar said that people weren’t always apathetic to the suffering of animals. Until the early 90s, the Society for Preventing Cruelty to Animals, which comprised of civil society members as well as government officials, was very active.

Back then, they had the authority to punish people for being cruel to animals, which the NGOs cannot do today.

She pointed out that the even if PAWS establishes a shelter and vaccinates animals, very few people would be willing to adopt them. She feels that people like to own only pedigreed animals. “This mentality needs to be changed. People need to open their hearts for all animals.”