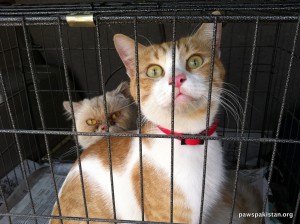 Two cats were dumped by someone at their neighbour’s one fine day. They had actually sent their driver to dump them on the streets far away from home, but he didn’t have the heart to do that. He knew his neighbours were animal friendly, so he left the cats with them.

We found a foster home for them the next day and moved them there. The female was pregnant, and gave birth to three kittens just five days later. All the kittens died within 24 hours as the mother was too stressed out to take care of them, and they could not make it on their own. The good news is that both cats have been adopted and are doing quite well now.

One thought on “Dumped cats get adopted”