All over the world animal welfare activists are trying to create awareness about the importance of preserving marine mammal habitats and keeping wild animals in the wild where they belong. But here in Karachi, instead of promoting ecotourism and keeping our marine waters pollution free, we prefer watching dolphins perform unnatural acts in captivity and get excited about the first company putting up a dolphin show in Pakistan. 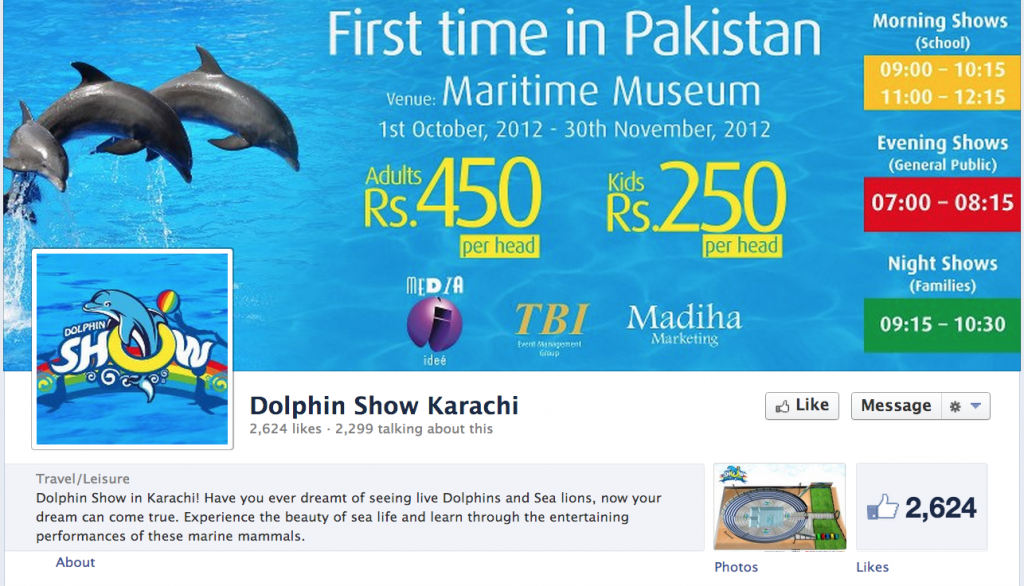 Experience the beauty of sea life and learn through the entertaining performances of these marine mammals. For the first time in Pakistan, Dolphin International brings you a one in a lifetime experience, an incredible destination for the family as you enjoy hours of fun and frolicking with Dolphins.

They have been working in Russia from last 28 years in various cities of Russia. Five performers, two handlers and a doctor will be coming to Pakistan along with four bottlenose dolphins and two sea lions for more than 208 shows in Karachi.

In 2008, the Pakistan Whale and Dolphin Society was set up in an effort to create awareness about these wonderful marine creatures and to encourage whale and dolphin watching in Pakistan. It was part of The Darwin Initiative which identified 12 species of marine dolphins and whales in Pakistani waters.

According to Dr. Mauvis Gore of the Darwin Initiative,

Many young people in Pakistan are interested in dramatic marine life like whales and dolphins, but few of them have the slightest idea that these animals live on their doorstep, some very close to Karachi! Throughout the world whales and dolphins, despite their popularity, have declined dramatically in numbers. Whales were over-exploited around the globe, including illegally by Russian whalers in Pakistani waters during the 1960s. Dolphins have been reduced in numbers as a result of being trapped, usually accidentally, in the incredibly large nets used by some modern fishing vessels. Pollution, deadly strikes by large vessels, and loss of food and habitat have further reduced numbers. “The probable very recent extinction of the Yangtze River Dolphin in China shows what can so easily happen to dolphin species,” says Dr. Gore, “we want to help make sure that this doesn’t happen to similar species like the Indus and Hump-backed Dolphins, in Pakistan.”

Keeping dolphins in captivity is cruel. The World Society for the Protection of Animals (WSPA) states that 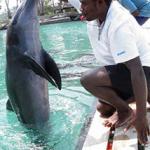 To a dolphin, a pool is a cage. These fast moving animals, which form complex social groups when free, cannot behave naturally in captivity. On these grounds, WSPA campaigns for the closure of all dolphin attractions.The mortality rates and abnormal behaviours of captive dolphins prove that a lack of stimulation causes them terrible stress. Swimming listlessly in circles is just one common indictor of boredom and psychological distress.

Space is also an issue – pools are miserably small for large, far ranging animals that would swim up to 50 miles a day in the wild. The shallow waters expose dolphins’ delicate skin to painful sunburns.

By withholding food, some trainers coerce dolphins into repetitive and unnatural behaviours, performing ‘tricks’ for the public. Hunger forces the dolphins to ignore their most basic natural instincts. They are even trained to beach themselves, despite the danger of doing so.

Visitors don’t always realise that the much promoted dolphin ‘smile’ does not reflect of their emotional state. It is simply the shape of their mouths.

The more we learn about marine mammals, the more troubling it becomes to keep these complex, intelligent creatures in tanks and pens. It’s time to see the situation from the animals’ point of view and reconsider whether it’s right to confine them for our amusement. Dolphins are long-lived, wide-ranging predators who are self-aware and capable of abstract thinking. When captured from the wild for public display, they are removed violently and traumatically from their social units. Japan’s drive fishery is particularly cruel.

Never visit a marine mammal attraction – the very act of confinement is damaging to their welfare.

Instead, look for a responsible dolphin watching boat tour and enjoy the spectacle of wild dolphins at sea, performing on their terms. A responsible tour will not endorse any interaction with the dolphins.

If you witness any kind of captive dolphin show or swim programme, report it to WSPA at wspa@wspausa.org. Some attractions might seem ethical, but if you report it, we can check.

is working to educate the public about the threats posed to the conservation and welfare of marine mammals by the practice of exhibiting them for entertainment. We work with governments, media, local activists, and the general public to change the perception of captive marine mammals. You can help: Don’t swim with dolphins, and think twice before attending a marine mammal show.

Dr. Lori Marini, a neuroscientist and Senior Lecturer in the Department of Psychology and faculty affiliate of the Center for Ethics at Emory University, when asked whether dolphins in captivity exhibit the same behaviours as those in the wild, had this to say:

I don’t need to give my opinion because there’s an abundance of evidence that shows that dolphins and whales in captivity show a lot of the same abnormal behaviors that are exhibited by other animals in captivity. These include things like stereotypies where they do repeated movements, self mutilation and just basically other behaviors associated with being psychologically disturbed. There are also several peer-reviewed studies that have shown elevated stress hormones in dolphins and whales in captivity.

So there really is no way that an artificial setting could provide an opportunity for the range of natural behaviors that dolphins enjoy in the wild, just from a physical point of view. The largest tank in the world is something like less than one ten-thousandth of one percent of the natural range of most dolphins and whales. So there’s physically no way that these animals could exhibit natural behaviors in captivity.

I know that some members of the captivity industry have made the point that in captivity these animals are fed fish and they don’t need to deal with the stress of capturing their own prey. But in fact, being fed dead fish can be a stress. In the wild, they really enjoy the opportunity to collaborate with each other and catch prey and travel with their companions, and basically work for their prey. In captivity, all of that stimulation is taken away.

So there is a lot of scientific evidence that shows that dolphins and whales — both wild-born and captive-born — exhibit a lot of psychological abnormalities in captivity. 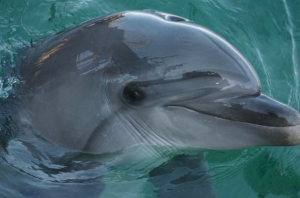 As Fisher Steven, the producer of ‘The Cove’, the Oscar nominated documentary about the cruel dolphin trade says,

At this very moment, a dozen boats in the town of Taiji, Japan, are heading out and rounding up hundreds of dolphins in a secluded cove. The fisherman will close off the cove with nets, and with the help of employees from various dolphinariums, they will try to find the next “Flipper” among their catch. The fishermen will snatch these beautiful creatures from their natural habitats, hoist them into nets, load them onto airplanes and drop them into a cement tank in the middle of Turkey, Korea or other nearby Asian countries.

It’s time for us to step up and make a difference in these animals’ lives. Until we make marine parks obsolete, dolphins and other sea mammals will continue to be senselessly captured and slaughtered.

The Born Free Foundation is another international organisation that “works to end the exploitation of wild animals in captivity, phase out zoos and dolphinaria, and protect species in the wild.” They too have called for an end to captive whales and dolphins.

The captive dolphin industry has become big business – from the tour operators who sell the excursions, to the facilities that train and perform the animals, to the people who are still capturing wild dolphins from the wild to maintain the industry. However, concerns that these animals are exploited as commodities, with little regard for their welfare and needs, brings their use within the tourism experience at all, into question. The travel industry is therefore faced with the dolphin dilemma.

There are thought to be over 1,000 individual dolphins currently being kept in over 200 facilities worldwide mainly congregated around the tourist resorts of Southern Europe, North America, Asia, the Caribbean and increasingly the Middle East. The vast majority of these animals originated in the wild but were separated from their family pods and captured for a lifetime in captivity. Only in Europe and the USA have captive breeding efforts succeeded in maintaining the captive population in some facilities. Dolphins (mainly bottlenose) are still captured from waters off Cuba, Solomon Islands, Japan and other places to supply a non-sustainable industry marred by high mortalities, low breeding success and physiological problems. Yet, the number of facilities is on the increase and this is a direct result of the tourism industry.

Captive dolphins and whales (collectively known as ‘cetaceans’), like thousands of other wild animal species, are victims of the captive animal industry. Confined to small, cramped and featureless tanks filled with chemically-treated water, the captive environment is so different to the vast oceans from which many have been captured. Known to suffer from stress, aggression, reduced life expectancy, breeding problems and ulceration often caused by the chemicals in the water, captive cetaceans have an extremely bleak future in the hundreds of dolphinaria and marine parks around the world.

We urge you to do your bit and help create awareness about the plight of dolphins in captivity. In addition to contacting international organisations, send a polite email to leading newspapers of Pakistan with a reminder for the people of Karachi as to what dolphin shows are all about. There are other ways of entertaining ourselves that do not involve captive animals. Let wild animals remain in the wild, and let us work to preserve their habitats instead.

10 thoughts on “Does Karachi really need a Dolphin Show?”