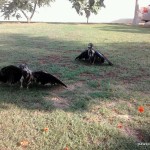 I was excited as well as apprehensive to greet the two kites which were delivered to me this Thursday evening. Packed up in the crammed delivery cage, they appeared to be much smaller in size than I had imagined them to be. Obviously their tails had either not developed or were cropped to accomodate the convenience of handling them and caging them.

It was nearly sunset when I let them out of the cage basket and because of the time of the day and keeping in mind the emotional trauma they must be experiencing, I decided to let them have their privacy for that day. After all they are here and tomorrow is a new begining for them! 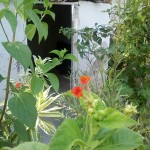 The next morning I got up quite early and went out to the garden area where I had housed them in a shed which I had personally cleaned and washed a day earlier. it has a wooden grilled door so they are safe from lurking tom cats of the neighbourhood. Before I go any further let me officially introduce you all the two kites with their respective names. 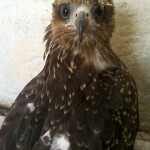 Out of the two, one is bulkier with huge round eyes..he has feathery crown that adds a cute look to him specially when he looks straight in the camera as if he was born to be a model. “Arden” he is…which means “valley of eagles. Arden has a quiet personality..he prefers to stay “under cover” hiding behind pots and greenery..eats less..and takes a bite when no ones looking at him. Sometimes when I try to pet his crown, he twists his neck all the way in circles! – I have a pair of handy gloves that I wear always when I have to handle them.

“Aras”.. means intelligence of eagle….the second Kite..is petite. Not much feathers on her. I dont know for sure their gender but Aras seems loving and feminish compared to the attitude air that Arden carries on his spread wings.

Aras can be handled without gloves. She is timid and easily allows me to pet her. I have yet to train them to come and sit on my gloved hand. A bit of perseverence and am sure I will succeed.

I feed them chicken liver or mince.. Aras is a hogger..she loves to eat takes out the squealing noise whenever she sees food and wants to be fed first whereas Arden stands in the corner eyeing her as if saying.” stop being a drama queen and leave something for me too”! 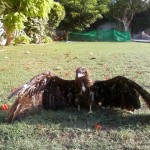 Both enjoy a bath everyday from the garden hose. and spread their wings to dry off in the sun. They seem to look so magnificient spreading their wings as if just about getting ready for a flight up high. Wish it could be possible for them..but if not then..they always have a secure and caring home right here in my garden. And to end on a happy note…”Grace” the very old eagle that visits me for food almost every other day spent the entire day today sitting high and keeping a watch on the two down in the garden. She was watching my every move while I ws handling the two kites. So probably she too knows that they are family!

Thank you PAWS for this lovely gift.

Note by PAWS: The two kites were initially rescued by someone (we don’t know who) and left at a private veterinary clinic. We took care of the daily boarding expenses for about two months, but when nobody came forward to house them, and especially when we found out how they were being housed, one of the co-founders decided to foster them both in her garden. Both kites finally went to their forever homes this week. We are grateful to Zahrah Faisal for adopting them. Aras and Arden cannot fly, but they will be able to live in a large garden and roam around according to their own free will.

This is what Zahrah sent us a week ago:

“A poem I had penned a while back for an injured eagle that had itself entwined in the pole wires and its wing got damaged. Tending and caring for it, applying medication, a concoqtion of haldi paste to the affected wing was an ordeal. I had put it in an open box and making sure to hold her from the back side wearing gloves. Slowly it recovered and came to sit out on the box. It could fly around a bit. And Finallyt was a moment of joy for me.. the day came when I just let her free and she flew away.I I still feed the roaming eagles/kites that come over my patio. One of them has a very old connection with my routine of feeding and comes on a regular basis to have its snack.
I am happy to get a call from PAWS that they would be delivering me 2 injured kites today. I havent seen them yet but am sure it would be an experience for me that would be very rewarding.

Poem…
“I hear him..the whistling sound
I know I can tell when he’s around
perched up high pruning feathers strong as steel
waiting anxiously for his morning meal
I pack his favourite bite in a plastic wrap
fling it across high up in the air
in seconds he takes his regal flair.
zooming down gracefully he clutches his scrap
heads towards his usual abode..
starts nipping devouring the long awaited food.
And as I watch him soar above high
..looking above towards the sky.
.marvelling at the lightening speed of his pace
…my magnificient eagle and his flight of grace.!”