According to the Born Free Foundation, “Wild animals do not belong in zoos. They belong in the wild.” The barren concrete enclosures of the Karachi zoo are a prime example of the suffering captive animals endure in captivity. Faiza Ilyas’ report in today’s DAWN newspaper quotes zoologist Abida Raees, an official of the zoo, justifying the small cemented cage of the zoo’s lone leopard:

The cage chosen for the leopard was big enough. While the leopard was in its old enclosure, it was always found in its concrete-floored retiring room. So, it didn’t matter if its cage had no other facilities in the old cage.

The leopard died a few days ago. It was caught from the wild in Pakistan and kept in a turkey cage at the Karachi Safari park for a few years before being shifted to a concrete cage at the Landhi-Korangi zoo. It was later shifted once again, this time to the Karachi zoo where it was kept in a larger cage. However, when the zoo management purchased a pair of pumas in July they shifted the leopard to a small concrete cage.

It is beyond comprehension how the Karachi city administration always has the money to purchase animals, but absolutely none to upgrade the existing enclosures to resemble the animals’ natural habitats. Not only does it regularly buy animals from foreign captive breeding facilities, it also enlists traders to capture animals from the wild and bring them to Pakistan. 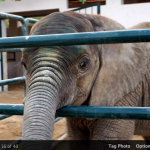 The four baby elephants separated from their mothers and captured from the wild in Tanzania, supposedly as ‘gifts’ from the Tanzanian government, were brought to our city for its ‘entertainment starved children and adults’ in 2009. More than three years later they are all still housed in small barren individual cages. Two of them were shifted to the Karachi zoo more than a year ago. They are housed in separate cages with concrete floors. The ones at the Safari park are still kept in their initial quarantine cages. The city administration claims there is a ‘lack of funds’ to upgrade their enclosures. However, there is no lack of funds in purchasing more animals for these facilities in the near future.

A report in The News this summer quotes the Karachi Metropolitan Corporation’s administrator Muhammad Hussain Syed:

New animals, including an elephant, a lion, a rhinoceros and a hippopotamus, are being purchased so as to make the two recreational spots more attractive for citizens. Pakistan’s biggest bird aviary would be completed at Safari Park in the next three months, which would contain hundreds of species of birds.

There is something quite morbid about being ‘entertained’ by the misery of other sentient beings. Surely there are other ways to entertain our people. How about boat rides to the mangroves and to Manora island, cleaning up our beaches and allowing traditional vendors, sandy volleyball courts at Seaview, football, basketball and cricket facilites at our parks, swimming pools, and turning all of whatever is left of Gutter Baghicha into a massive public park?

What have the animals done to deserve such treatment? Why can’t we not just let them live as they were meant to – wild and free in their own natural habitats? They do not exist for our entertainment. They are sentient beings just like us and wish to be free from pain and suffering. Let us work to protect and preserve their natural habitats. Zoos are anything but educational. All they teach our young generation is that animals are meant to be caged for our up close and personal entertainment.

An editorial in DAWN earlier this year pointed out the suffering captive animals endure in our zoos:

Animals in our zoos are poked and prodded by visitors who exemplify all that is callous about this country. Mental well-being aside, zoo animals are also neglected physically by apathetic, incompetent or resource-strapped authorities. Little surprise then that the mortality rate in Pakistan’s zoos is unacceptably high. We should hang our heads in shame because we have failed miserably in catering to the needs of the non-human animals entrusted to our care. Anyone who cages an animal should pause for a second and think how it would feel if the same were done to him or her. Given our track record, Pakistan does not deserve zoos of any sort, public or private.

Please write a letter to DAWN thanking them for bringing the suffering of animals in our zoos to light. DAWN takes letters at letters@dawn.com

Do write polite letters to the Karachi city administration through other publications as well about the plight of animals in captivity. Ask them to not add any more animals to our zoos and to upgrade the enclosures of the existing animals. Remind them that animals are not for our entertainment. Your letters will help contribute to the continued coverage of animal welfare issues in the media.

One thought on “Shut down Karachi Zoo”