Karachi: The Friday, view November 8 DAWN has an article by Faiza Ilyas about the arrival of Stephen, a Beluga whale from Moscow, for the entertainment of Pakistanis. Marine mammal shows are scheduled to be held next month by a private firm despite reservations by nature conservation experts on the violation of animal rights. 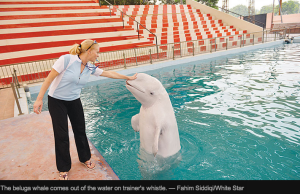 “We strongly suggest to the government and the agencies concerned to reconsider the initiative and look into the matter in detail. There are sufficient opportunities for public to see wild dolphins off the shore of Pakistan, especially Karachi. They can be observed without too much effort or expense and the experience is much more rewarding,” stated the World Wide Fund for Nature (WWF) in a statement.

Dr Mauvis Gore representing the Marine Conservation International, a global partnership formed by marine scientists, said that circuses with animals were being phased out in the world as the conditions for animal welfare and husbandry were often atrocious. Being moved about under stress, cramped conditions, performing in a tiny arena packed with loud noises did not provide the animals with reasonable living conditions.

“It also gives the public the impression that these animals are there to perform for the public and at their whim. So rather than teaching the public to respect them as wild animals, they are placed in a fish bowl and treated as toys.

“Pakistan is being introduced to their key marine wildlife in a way that could take generations to re-educate,” she said via email when asked to comment on dolphin shows.

We encourage you to write a letter to DAWN thanking them for covering animal welfare issues. Please also use the opportunity to politely remind the Karachi Metropolitan Corporation that there are other ways of entertaining ourselves that do not involve captive animals. Urge them to let wild animals remain in the wild, and let us work to preserve their habitats instead. You letter will help create awareness about the plight of marine mammals in captivity.

Animals do not have a voice. You can make a difference by speaking up for them.

You can also send in letters to other publications:

Let us know if your letter is printed!

3 thoughts on “Captive whales and dolphins in Karachi”