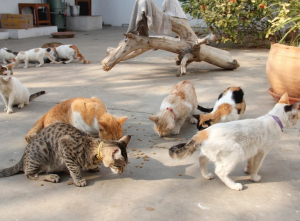 KARACHI: A few years ago, cialis it was literally raining cats for Maheen Zia, troche the co-founder of the Pakistan Animal Welfare Society (Paws). Zia, viagra 60mg a documentary filmmaker by profession, was in a market when she heard a cat crying. She glanced up, and to her amazement, she saw a kitten hanging. She opened her arms and the tiny feline fell straight into her life. That is how Zia met Coco and decided to start an initiative to save stray cats, along with Mahera Omar. The two women had grown up seeing stray dogs being shot so they decided to change this trend.

On Thursday, Paws held a day-long pet adoption day, for which they advertised on Twitter, Facebook and their website. Even though the turnout was low, Zia hoped people will get in touch with them to rescue the stray cats.

“No one has showed up today,” admitted Omar, sadly. “People called for the address but it’s already 3pm and no one has come yet.” She was hoping several cats will be adopted so they have more space for emergency cases.

Only one or two of these animals is adopted every year on average. “People are breed conscious,” Omar explained. “They usually call to see if a Siamese or Persian cat is up for adoption. They are even willing to pay for those.”

Zia’s reason to keep the initiative going was simple. “These animals need love,” she told The Express Tribune. She explained there are some clinics which nurse stray cats back to health but they keep them in cages. “Cages are not good for them, they need homes where they can be free.”

The society runs on donations and all the funds they collect go towards the rescued animals — their food, medical bills, housing, and other expenses. Right now, Zia has 35 cats up for adoption — some of them came on their own, some were dropped by people, and others they learned about when people called to inform their location.

They used to keep dogs as well but they stopped doing so as their current facilities did not allow them to take care of canines, Zia explained. “Cats are small and can be quarantined in a corner when they are injured,” she explained. “But dogs need more space.”

In the future, the duo wants to have an ambulance and several clinics for stray animals that have been hit by cars or injured in any other ways – a complete veterinary hospital. They want to give graduates of veterinary schools a second option apart from government jobs.

“We had a private vet last year,” Omar recalled, adding that he was a fresh graduate from Baqai University who used to help any injured stray animal that people would tell us about on social media. “Sometimes, he couldn’t go to some places because of unrest in the city.” They no longer have a personal vet on their team so they have to arrange one the moment they have an emergency case.

The two women agreed that most people do not love animals. In fact, the club next to Zia’s house would stuff all the stray cats in a bag if they roamed into their premises and throw them away. “We used to name all our cats before but when the club started throwing them away we stopped,” she said. After they talked to the management, they reached an agreement under which the club brings over all the cats to them so they can identify them before they are thrown away.

However, they hope to change people’s attitudes towards animals. Zia and Omar think that they have to start from schoolchildren. Schools have been helpful in creating awareness, as well. Once they learn to love, then these living things will be protected as well, they hoped.

Source: The original article is on the Express Tribune website here.

3 thoughts on “Adopt a pet: It was literally raining cats for PAWS”