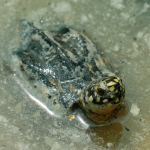 Several newspapers yesterday covered the ongoing turtle smuggling case in Pakistan. Please read and share widely. Turtles and tortoises are listed as endangered species by IUCN and CITES as their population is on the verge of extinction. These stories give us an opportunity to send appreciative letters to the editors about the importance of wildlife conservation. Do thank them for the coverage of wildlife issues in their publications and demand justice for the voiceless.

Be sure to let us know if a publication prints your letter(s) so we can share your success with other writers. Thank you for all your efforts in behalf of animals!

The Sindh High Court has stayed criminal proceedings against a wildlife trafficker before a judicial magistrate court. The decision comes in the wake of a constitutional petition filed by WWF-Pakistan, price Shehri CBE and Pakistan Animal Welfare Society for the enforcement of all laws relating to turtles and tortoises in Pakistan as well as the international treaties signed on their behalf.

Advocate Faisal Siddiqi who represents the petitioners submitted that the accused should be tried under the Customs Act, 1969. He has also filed an application requesting transfer of the case from the District Court Malir to another competent court on the grounds that the petitioners apprehend that the Learned Magistrate has predetermined the outcome of the proceedings without hearing the submissions of the applicant.

The Sindh High Court has issued notices to the Federal Ministry of Interior, Climate Change Division, Federal Board of Revenue, Pakistan Customs Drug Enforcement Cell, Sindh Government Home Department, Sindh Wildlife Department and the accused Sajid Faiz Cheema in the turtle smuggling case to submit their replies regarding the illegal export of wildlife out of Pakistan.