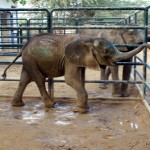 Spare a thought for the six elephants in captivity in Pakistan this World Elephant Day.

Kaavan, the lone Asian elephant in Islamabad Zoo, was donated by the Bangladesh government 28 years ago and is kept in chains. Suzi, the lone female African elephant at Lahore Zoo fares no better.

Four African baby elephants are in Karachi. They were captured from the wild in Tanzania, separated from their mothers, and kept in solitary confinement at a ‘quarantine station’ at the Safari Park a day after their arrival in 2009. All four were forced to live in this temporary enclosure for several years, until two of them were shifted to the Karachi Zoo. This video of the two baby elephants at the Karachi Zoo is from 2012.

Zoos rob elephants of their most basic needs. Elephants are active for 18 hours and roam up to 30 miles a day in the wild. They live in social herds and bonding with each other is an intrinsic need. Foot problems from unnatural cement floors is a leading cause of death for elephants in captivity. Saheli, was donated to the Islamabad Zoo by the Sri Lankan government in 1991 when she was just a year old baby. She died three years ago at age 22 of foot complications. Like Kaaven, she too had been kept in chains since the day she got to the zoo. The two baby elephants at the Karachi Safari Park, although shifted to a larger enclosure in 2014, are also kept in chains for several hours a day. “If we don’t chain them, they can act like a wild beast.” says their keeper. (source: http://www.dawn.com/news/1181210)

Wild animals belong in the wild. They don’t deserve a life in captivity. They don’t deserve to be kept in chains. Please speak up for Kaavan, Suzi, Sonu, Madhubala, Malika and Noor Jehan and put pressure on the authorities to phase out their elephant exhibits and send all six elephants in Pakistan to a sanctuary abroad.

As a DAWN editorial states:

“Given our track record, Pakistan does not deserve zoos of any sort, public or private.”
(http://bit.ly/1h2vCCl)

Kudos to the paper for having the courage to say it like it is: that we do not need zoos in our country, given the abysmal state of affairs in most of them. Please take this opportunity to send appreciative letters to the editor of DAWN for creating awareness about the plight of animals languishing in our zoos.