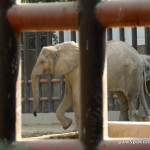 Having been chained for 20 years, sale ‘Saheli’ the female elephant of Islamabad zoo could no longer bear the ordeal of life in confinement, standing in one posture, infections in her feet and agony in her soul. She died on May 1, 2012. The six remaining elephants, thinly spread in four different zoos of Pakistan await a similar fate. ‘Kaavan’ in Islamabad, ‘Suzi’ in Lahore, ‘Noor Jehan’ and ‘Madhubala’ in Karachi zoo and ‘Malika’ and ‘Sonu’ at Safari Park. Ironically it is not our love but gifts, poaching, smuggling and selling that forcibly removed these elephants from their natural habitats. The elephants in our zoos may well be compared with the prisoners of Guantanamo – caged, tied with chains, confined in solitary cells, ill-treated, ill-fed and emotionally battered.

It is now acknowledged more than ever that elephants are highly intelligent animals, capable of a range of emotions similar to humans. They need care, compassion and an environment as close to their natural habitat as possible. There is unmistakable evidence to suggest that prolonged confinement and standing on hard floor leads to foot diseases, arthritis, weight related diseases, infertility, heightened aggression, and other forms of neurotic behaviour amongst elephants. 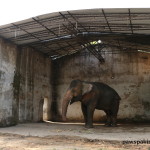 The American Association of Zoos considers solitary housing of elephants as an act of exceptional cruelty and requires keeping at least three elephants in a single exhibit. We are unacceptably guilty on this count and need to immediately release our elephants from their chains and cages. We need to create sanctuaries in Karachi and Lahore, each spread over 15-20 acres and housing a herd of at least three elephants. The sanctuaries should have large number of shade-providing trees, mud ponds, water troughs for drinking water, covered area with sand and soft hay for sleeping, feeding locations and water ponds for bathing. The sanctuaries should provide peace, silence and natural surroundings, where elephants and other compatible animals could live with freedom. They must be kept away from the screeching traffic, loud music, noisy bumper-cars, screaming roller-coasters and crowded fun lands – the typical characteristics of our current zoos.

The government has little interest or understanding of the cruelty meted out to these innocent creatures. Can the citizens come forward to alleviate the agony and torture, so mercilessly designed into the daily existence of our zoo elephants.

6 thoughts on “Elephants – from cells to sanctuaries”