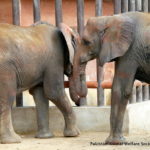 Today as the international community celebrates World Elephant Day, nobody in Karachi seems to have spared a thought for the four baby elephants in our city. We went to the Karachi Zoo to visit 10 year old Noor Jehan and Madhubala this evening.

Noor Jehan and Madhubala are the two baby elephants kept captive at Karachi Zoo. Captured from the wild in Tanzania and separated from their mothers by the late Pakistani animal trader Irfan Ahmed of Osaka Traders, they were brought to Karachi in 2009. The zoo, run by Karachi Metropolitan Corporation (KMC) claimed they were a gift from the Tanzanian government. There was much controversy reported in the newspapers on the import of the elephants even before their arrival to Pakistan.

When Noor Jehan and Madhubala arrived in karachi, there were accompanied by two other unfortunate elephant babies, Malika and Sonu. All four were put on public display at Karachi Safari Park just 48 hours after their long journey from Africa. We went to see their condition that day and happened to run into Irfan Ahmed, the person who had caught them from the wild. Osaka Traders had supplied several animals to zoos in Pakistan before, some of them amidst publicly reported controversy. He told us on camera with great pride how his team had separated the four babies from their mothers and brought them to their specially designed quarantine station at Karachi Safari Park.

Each baby was confined in a 10×10 foot enclosure, separated from each other by thick iron bars. One of them was laying flat on the floor as if in quiet desperation. The crowds that had turned up to see them were just ten feet away. There was no quarantine or rest for these babies. One could come up to them and pet them if one wanted.. these wild animals out of Africa. And so each of them remained in solitary confinement at their temporary quarantine station for the next one year. In May 2010, Noor Jehan and Madhubala were shifted to the Karachi Zoo, which by then claimed to have built for them an enclosure to rival those of any international zoo standards. 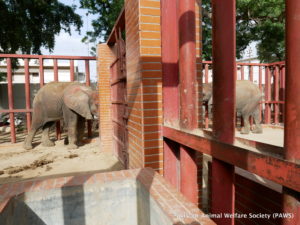 When we arrived at the zoo today, both elephants were locked in cells 15’x18′. We were allowed by the keeper to come through a gate and get closer to them. Both elephants were pacing in circles around their cells. A few minutes later the keeper opened the cell doors and led them out to a larger enclosure. We observed them for the next two hours in their barren surroundings. A cement pond full of murky water was in the middle, and two car tyres lay untouched. After doing a few circles of the enclosure, both elephants would come back towards the gate and bang into it, after which the keeper shooed us away. There seemed to be no signs of the zoo management acknowledging the fact that zoos all over the world are celebrating World Elephant Day today. 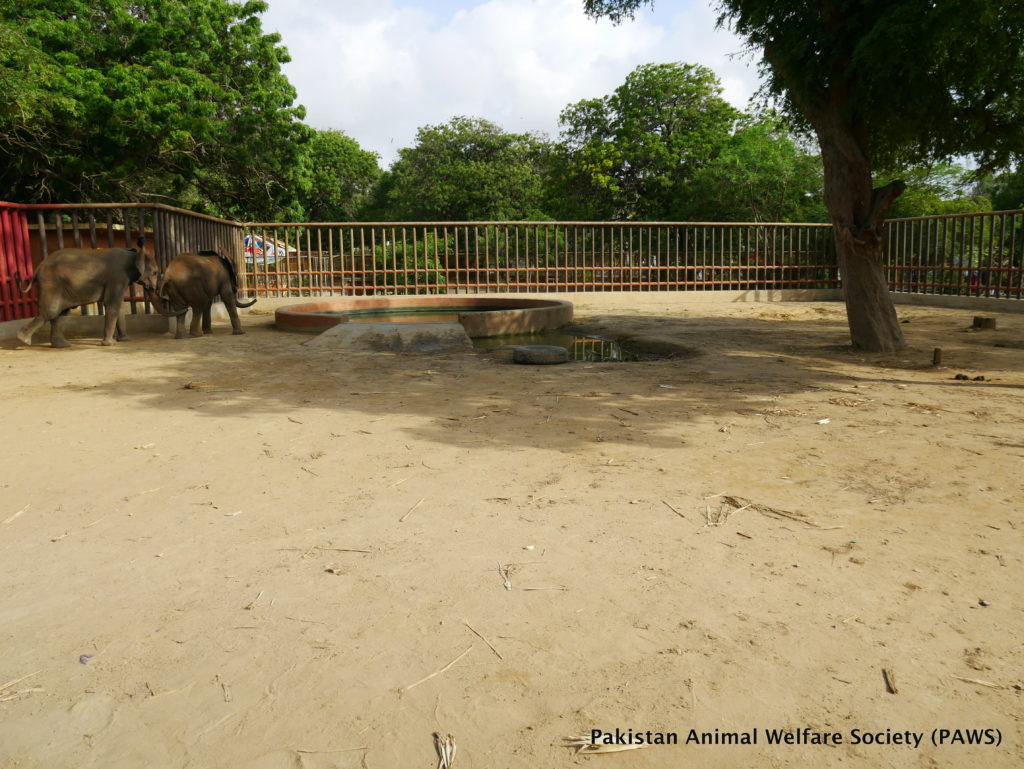 Zoos rob elephants of their most basic needs. Elephants are active for 18 hours and roam up to 30 miles a day in the wild. They live in social herds and bonding with each other is an intrinsic need. Foot problems from unnatural cement floors is a leading cause of death for elephants in captivity. Wild animals belong in the wild. They don’t deserve a life in captivity. They don’t deserve to be kept in chains. Several zoos abroad have shut down their elephant exhibits, including San Francisco, Chicago, Toronto and London Zoo. 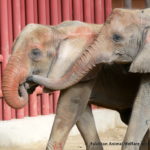 If you would like a better life for the Karachi Zoo elephants, we urge you to raise your voice for them. The animals cannot speak up for themselves. Your voice can make a difference.

Send letters to the editors of leading newspapers in Pakistan urging zoos to phase out their elephant exhibits. Do let us know if your letter is published and share it with us. You can also visit zoos in your cities and report on their conditions and email to us at info@pawspakistan.org. We would love to publish your report as a guest post on our website.