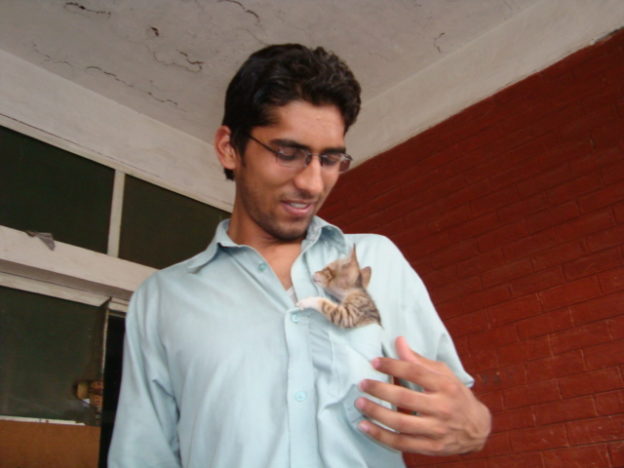 This essay, view rather a story, has been written in the remembrance of my pet kitten “Baggu”, who is now in heaven. She taught me what animal welfare actually is.

Here I would like to sum up some of my very unique and enigmatic experiences that I have been living through during sixth semester of my DVM (Doctor of Veterinary Medicine) degree.  In this semester my faculty offered five courses and two out of these five courses were directly discussing “Animal Welfare”. The semester continued in a very formal but in interesting way and we were taught a lot of literature about the concept and importance of animal welfare and animal-human bond.

The notion of animal welfare seems to be very simple and understandable until and unless someone starts “feeling” it; and the same was happening with me. All that induced a feeling within me that, the theory I have been studying about animal welfare should be analyzed and applied practically. All my passion soon converted into some sort of curiosity and I decided to have some practical experience of animal welfare.

Having all that stuff in mind, I started searching for a non-human companion for myself so that I can fetch out that innocent thirst of my mind. I didn’t have to wait longer and bumped into a perfect match. It was a cute little kitten, almost twenty days of age, seeking for her lost mother and crying for something to fill his empty belly. He was wandering on the footpath, in front of one of the University’s hostels and it was looking obvious for him to be crushed under the feet of any passenger. With a pleasant click in my mind, I took him up in my hands and patted his body gently. He responded me and showed me his feeling of being secured. To check his inclination towards me, I put him back on the foot-path and started walking towards the shopping center. As I was expecting, he rushed towards me and tried to approach in between my moving feet.

I finalized my decision and took him to shopping center and then to my room finally. I fed him with milk but he was somewhat unable to lick the liquid himself. He needed the mother or something mother-like. So I put milk in a syringe, removed its needle and offered him to suck milk from it. With my assistance, it worked out and it was the first time when I felt something new and something very strange in myself. I can’t explain all that in words but I can say that the feeling was something greater than an Oscar for me. As the milk was moving from the syringe to the kitten’s belly, the real theme and meaning of animal welfare was being taught to me by the nature. It was very cheerful to discover that ‘bond’ myself and for myself.

It is commonly coated that truth is always bitter but I, after having learnt all that, say that the truths witch are revealed on you by nature, are very sweet. I simply had fallen in love with Baggu (I named him Baggu later on that night). Soon, so many of my friends and hostel-mates got familiar with him and he was also responding to everybody with his sweet ‘meoows’ and cozy moves. He also took a sound sleep for more than four hours in my cupboard, finding a comfortable mattress for him on my passenger bag.

Baggu joined me again at night when I was studying laying on the carpet and he, realizing that I m busy with my notes, sat near my thighs and waited for me to attend him. I played with him for a few minutes and then I left for dinner. When I came back, Baggu was wandering around the corridors of hostel, trying to get himself familiar with his new home. He had made a lot of fans of him during that “cat walk”. He also started distinguishing me and my voice from the others. That night passed away and the new morning saw two new friends trying to know each other completely. Within very few days, it all lead me to a beautiful situation that I call “Baggu and me… me and Baggu” situation. The bond we mutually developed was nor an outcome of Baggu’s dependence on me; neither it was m merely a pet-owner relationship. This bond was actually a match of frequencies between two souls, triggered by, perhaps, the kind Mother Nature. Baggu became my best friend.

One day, it was very early in the morning when I went downstairs to have my breakfast and to get some milk for Baggu. I came back very soon but I was astonished to find him and his “meows” absent from my room and the other casual visiting places of Baggu. I searched for him in all rooms where he was expected to be; I even looked for him in washrooms but all in vein. I saw a large-sized tom cat wandering there which surely looked to be involved in Baggus’s suspicious absence. I was more than worried at that time and one of my hostel-mate, observing my involvement in that issue, informed me that he had seen Baggu in the mouth of that tom a few minutes before. At that time, I could imagine what would have happened with Baggu but it was not acceptable for me and I kept on searching for him with a hope that he would be laying somewhere injured and waiting for me………. But all my hopes ended up when I found his dead body in a neighboring room with his neck crushed and lacerated. Baggu had gone……………………

All it happened to me within a span of few days but it is one of the most valuable experiences of my life. First, I was very disappointed from myself that I could not take care of a little kitten, even being a veterinary student but soon it started revealing on me that I had been bestowed with something greater than that loss. I learnt what actually animal-human bond is and I saw the most valuable creature of Almighty Allah from very close…… The life!

It is a short story that will never end!

7 thoughts on “My dear Baggu”