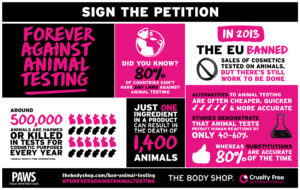 The Pakistan Animal Welfare Society (PAWS) is collaborating with The Body Shop® to collect 250,000 signatures by August 20, 2018 to end the use of animals in cosmetics testing. These signatures will represent Pakistan in calling upon the United Nations to adopt an international convention that will end animal testing for cosmetics products and ingredients everywhere and forever.

Everyday items like lotions, shampoos, mouthwash, makeup, detergents, glues, artificial sweeteners, bug sprays and cleaning supplies are amongst the many chemicals tested on the eyes, skins and digestive systems of animals. Rabbits and beagles are amongst the many animals routinely subjected to toxicity tests for the notorious “lethal dose” rating on household products. This involves dripping the chemical on their eyes to see how long it takes to burn their corneas, or forcing them to swallow large amounts to determine the dose that causes death. Pain relief is rarely provided and the animals are killed at the end of the experiments.

“Each time we apply that eyeliner, that purple lipstick or spray ourselves with a bug spray, spare a thought for all the innocent animals that have suffered such cruelty. Let’s demand an end to animal testing worldwide”, says Mahera Omar, co-founder and director of PAWS.

80% of all countries don’t have any laws against animal testing. Around 500,000 animals are harmed or killed in tests for cosmetics purposes every year. Just one ingredient in a product can result in the death of 1,400 animals.

In 2013, the European Union banned the sale of cosmetics tested on animals. India, Israel, New Zealand, Norway, Switzerland, and Turkey have similar bans, but there is still work to be done.

The Body Shop® is the first global cosmetics company to be forever against animal testing. PAWS urges Pakistanis to join their campaign by signing an online petition and volunteering to collect signatures on forms available in Karachi, Hyderabad, Quetta, Lahore, Faisalabad, Sialkot, Multan, Gujranwala, Islamabad, Rawalpindi and Peshawar.

One thought on “Forever Against Animal Testing”